This is a true story.  Not based on a true story, but an actual true story that happened to me about a year ago. Being a gold buyer is not glamorous and can be scary. You have to always be on your guard because you never know who you are dealing with.

I consider myself pretty savvy.  I am a big guy and don’t scare easily and can be intimidating when I need to be. Needless to say, I don’t get run over very easily and I am pretty proud to say I don’t make that many mistakes, at least I hadn’t until I met the “Gold Digger.”

I get calls all the time about people who have gold to sell, so this was not unusual. This guy was a vet, just back from Iran and had bought quite a few 22 kt necklaces for his wife. But, when he got back from his tour he found that she had not waited around for him and now he wanted to turn his gold into cash.
Mr. Manners NOT

He was volatile on the phone, but I shrugged it off because he said he had had a bad experience with other gold buyers.  Once bitten, twice shy was what I was thinking. No alarm bells were sounding just yet for me.

We met at my office and he was cagey about showing me the necklaces. A little doubt was creeping in, but I powered forward and told him I couldn’t make him an offer without seeing every single piece of gold. He was belligerent.  He was pissed.  He could have been on drugs.  But, he also allowed me to test each piece and x-ray each piece and each and every necklace was legit.

He didn’t want to give me his driver’s license and he wanted cash. I didn’t have that kind of cash at the office, so we had to go to the bank.  This is where I should have known something was up.  The Gold Digger wanted to leave the gold in his own sack on my desk. He kept picking it up and putting it in his pocket and then putting it back on the desk. He was volatile remember.  I was trying to keep him calm. I don’t know why I didn’t just ask him to leave.

The Ride to the Bank

This was a long ride. As soon as the teller counted out the $23,000 and some change, he grabbed it up and ran out of there.  When I offered him a ride back to the showroom, he had no problem cussing me out. When he turned around, I saw that he had a small gun in his back pocket and I got a sinking feeling in the pit of my stomach.

I was sick.  Shaking, sweating, scared and felt like I had narrowly escaped disaster. I thought about my wife and three kids.  I thought about everything that I took for granted and how easy this life of buying and selling had come to me so far and how lucky I had been up to this point. I opened the bag on my desk and every single piece of gold inside was fake.

I Had Gotten Screwed by the Gold Digger

But I had gained so much more.  I had gained perspective on how important it is to be safe and not so cocky.  I had learned yet another lesson about how to do business and how to value your valuables, and this time the valuable was my life.[/vc_column_text][/vc_column][/vc_row] 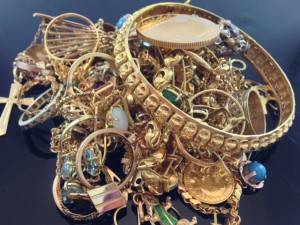 [vc_row][vc_column][vc_column_text]The price of gold is on the rise, which means that if you own gold, whether it is jewelry, coins…

[vc_row][vc_column][vc_column_text]Most of us are pretty Internet savvy these days, but there are still times when navigating Google or Yahoo can…

Some or you, or maybe even most of you might not even think of your jewelry once it is sold…

Is this a riddle? No.  What do gold and the price of tea in China have in common? They are…