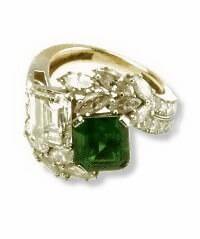 Jacqueline Kennedy Onassis is most commonly remembered for her time as the First Lady from 1961-1963, as well as her extensive historical preservation efforts both during and after her time in the White House. However, a little known fact among most people is that she is also an icon in the jewelry world! At the time of her passing in 1996, … END_OF_DOCUMENT_TOKEN_TO_BE_REPLACED

Jonathan's Fine Jewelers is an independent watch dealer and is not sponsored by, associated with and/or affiliated with Rolex, S.A. Jonathan's Fine Jewelers only sells pre-owned Rolex watches and provides its own warranties on the watches it sells. Rolex, www.rolex.com, is under no obligation to warranty-service watches sold by Jonathan's Fine Jewelers. Rolex Datejust, Rolex Day Date President, Submariner, Presidential, Explorer, Sea Dweller, Super President, GMT Master, GMT, YachtMaster, Prince, Milgaus, MasterPiece, Air King, Cosmograph Daytona, and PearlMaster are all registered trademarks of the Rolex Corporation ( Rolex USA, Rolex S.A.) To buy a new Rolex watch, please visit rolex.com for a list of authorized Rolex dealers near you.